I needed a solid day to recover from it, but I climbed Mt Tsukuba this week! I got to try out my new hiking boots, and although I don’t really know what constitutes “proper” hiking, this felt a bit more like it.

Since the previous mountain I “climbed” (Mt Takao) had a paved path up the whole way, this in comparison was on a whole other level. It was very rocky in large parts, so I wouldn’t recommend it if you are looking for something relaxing. 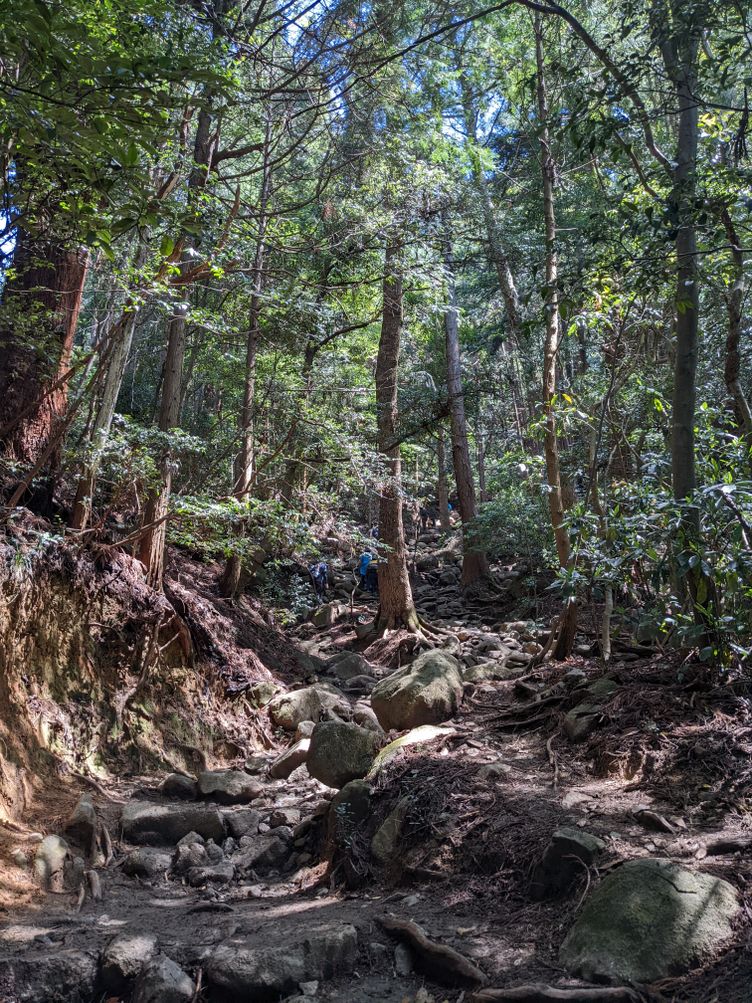 However if you still want to enjoy the views from the top, there is a ropeway and cablecar that lets you skip the hard bits.

We decided to take the harder route on the way up - the Miyukigahara course and the easier course - the Shirakumobashi course on the way down. Both should only take 2 - 3 hours at most. 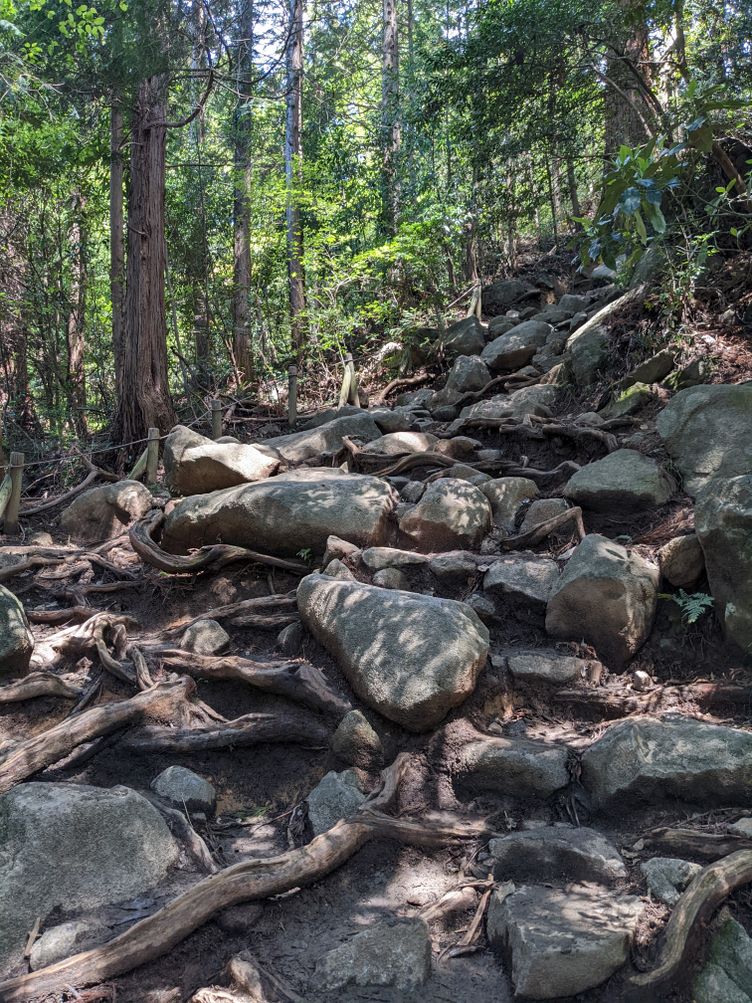 The way up was quite muddy and very rocky, so I’m definitely glad we did not attempt this on the way down. 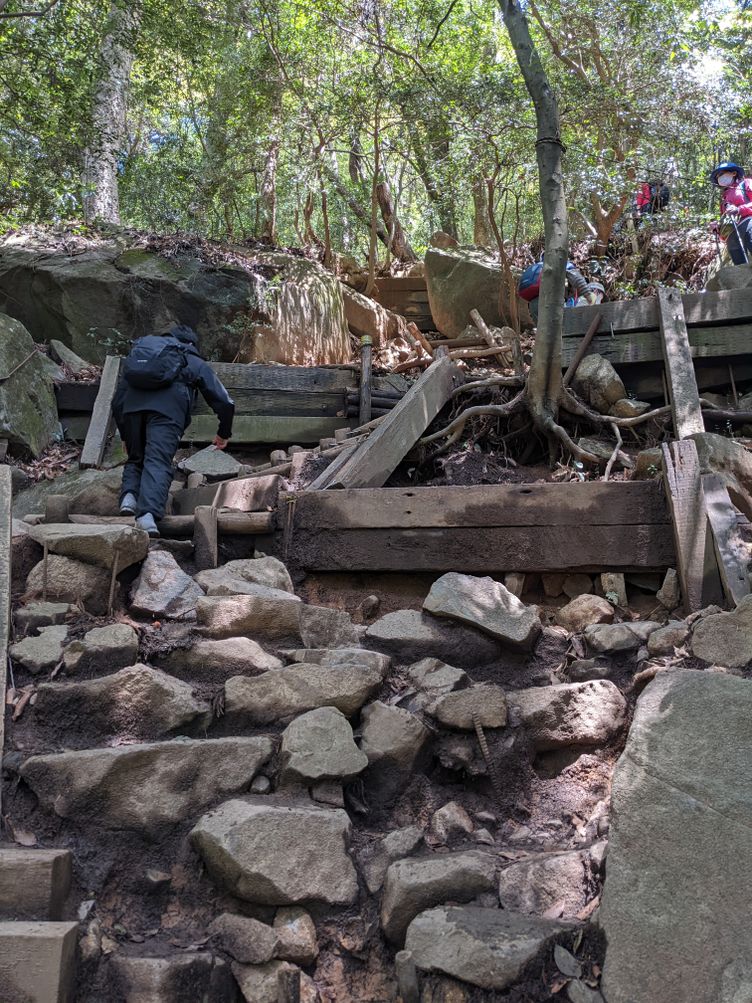 Once you reach the top, there are some food and souvenir stalls you can visit. There were plenty of people here who came via the cablecar and ropeway to check out the views.

Mt Tsukuba is actually made up of two separate peaks - Mt Nyotai and Mt Nantai (elevation 877m and 871m respectively). So from the top you need to walk another 30 mins to visit both the peaks. Since we visited on a public holiday, there were lines for both. The line for Mt Nantai wasn’t so bad, and there was a little viewing point you could chill at and enjoy the view.

However the line for reaching Mt Nyotai was actually crazy long. Personally I would have been happy to skip it since the view you’re going to get is about the same, but one person in our group wanted to line up so we did.

Once we reached the summit, we realised the reason the line was so long was because everyone wanted to take a photo on a rock. And the path to the rock is narrow and rocky enough that only one person or group can reach it at a time, meaning it takes ages for each person to get their photo taken.

So having experienced the “hard” route on the way up, we were expecting something more relaxing on the way down but it honestly was still rocky as heck. There was still a long section of rocks where you had to essentially lower yourself down by your hands. Luckily there was a lot less mud so things weren’t too slippery.

What made the descent worse was how congested it was. There were huge lines, but luckily the lines were for the ascent so I felt sorry for these people who probably had to spend 2 hours lining up (the lines were honestly that long) to reach the top. But since the route was narrow in some bits, it slowed us down as we had to wait to allow some people to ascend before we could descend. What also made things worse was that the people lining up took the easier route so then you had to scramble down on the harder route.

Once we passed the rocks, it got a little easier but these leafy bois will get you if you are not careful. I slipped and landed on my butt at one point and then so did the person behind me not a minute later.

I was super hungry by the time we reached the bottom so I got some curry. The rice was in the shape of Mt Tsukuba and its iconic double peaks.

Even though I go to the gym twice a week my muscles were still really sore the next day so I spent the day recovering.

Mt Tsukuba is easily accessible via the Tsukuba Express from Akihbara station (45mins) plus a 40min bus ride from the station to the shrine which marks the start of the trail.

Even though it was a public holiday, the train itself was quite empty when we left at 8am, so we were able to sit all the way. We gave ourselves 10 minutes between the train and the bus, but I would advise allocating a bit more time than that to line up for it because we just squeezed onto the bus (and had to stand). And if you can’t get on the bus, you may have to wait another half an hour for the next one.

On the way home, the lines for the bus were super long, but luckily they put on extra buses so that everyone could get back to the station. Just make sure you don’t miss the last bus at 5pm!

In terms of climbing the mountain itself, we started by 10am in the morning and didn’t have any issues on the climb up. If you attempted to climb up in the afternoon you may end up lining up for multiple hours (if it’s a public holiday) so I wouldn’t recommend it.